In the past I have collected a number of things. I have a nice collection of sewing tools. This is a small wall cabinet that features some of them. 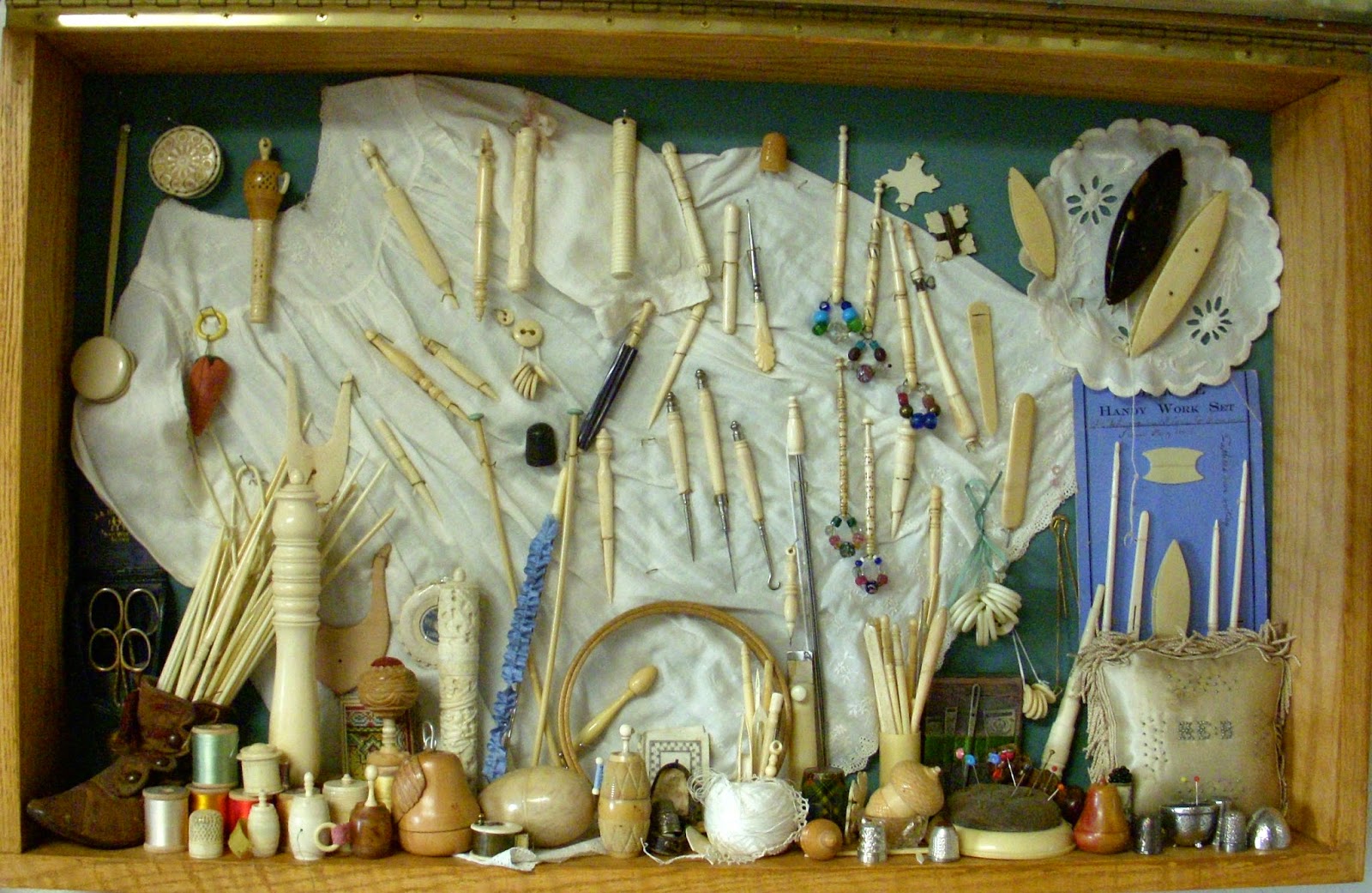 I started collecting years ago when they were very hard to find. My favorite material is mother of pearl but most of my things are bone and ivory.  I have a nice assortment of white on white embroidery, mostly for study and inspiration.
One thing that I had not collected was samplers. I love to look at them and stitch them but knew that the prices of the ones that I most admired were way out of my budget. On day a few months ago, this darling lady came into work and wanted to know what a couple of her red work samplers were worth. We looked them up on the internet (what did we ever do pre-google) and found that they were not that valuable. She was concerned because although precious to her, her family didn't care about them at all. I was able to purchase this one from her. Her Aunt Helen had stitched it in 1898. At first I thought it is not very old - like the samplers from the 1600 or 1700's, but then realized that it is over 100 years old.  I thought that it was so much fun that as I studied it, I decided to start charting it to reproduce. I then did an adaptation of it so stitchers can add their name and some period appropriate motifs to make it their own.  Kelmscott will be releasing it in May for retail sales. 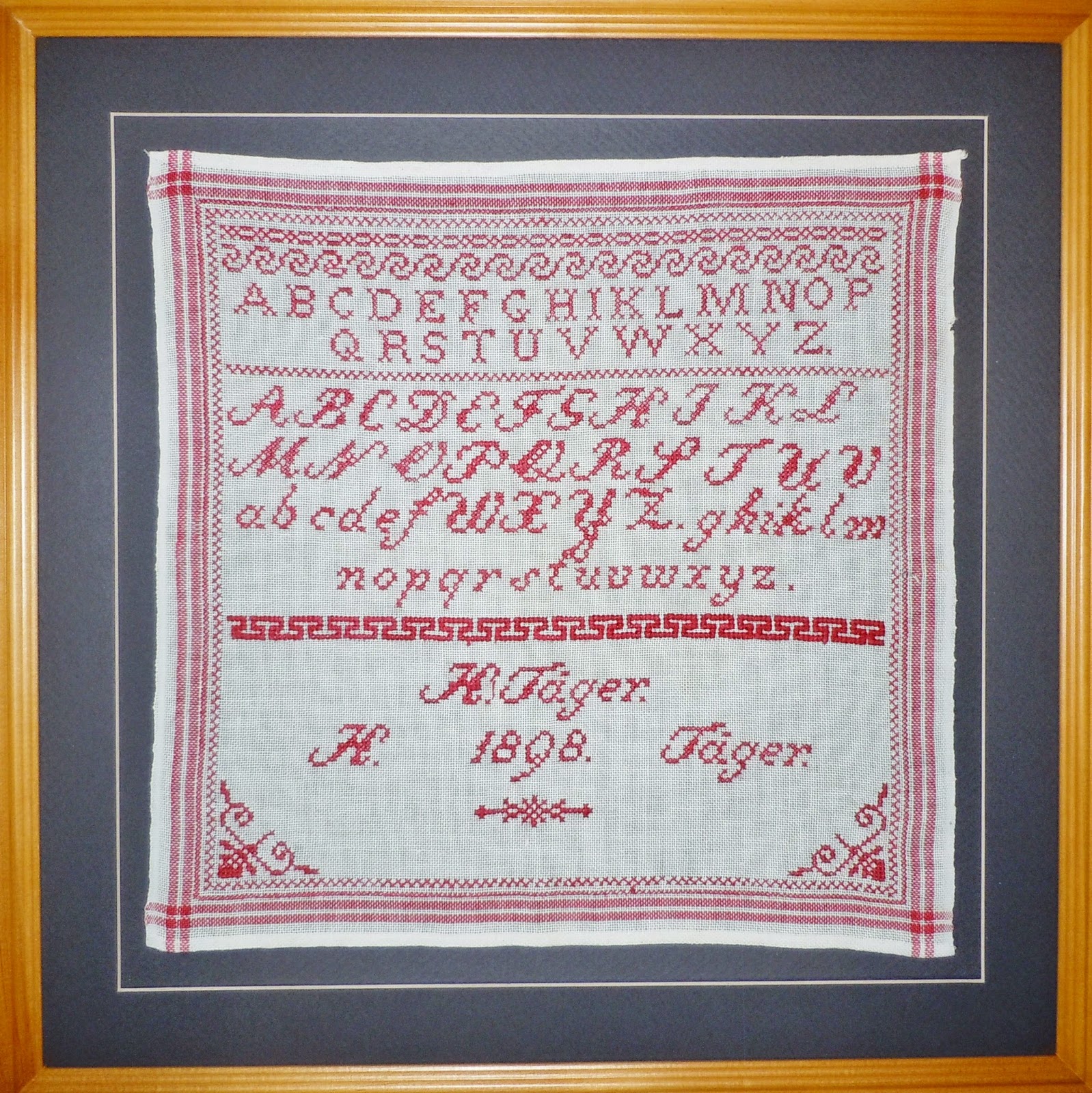 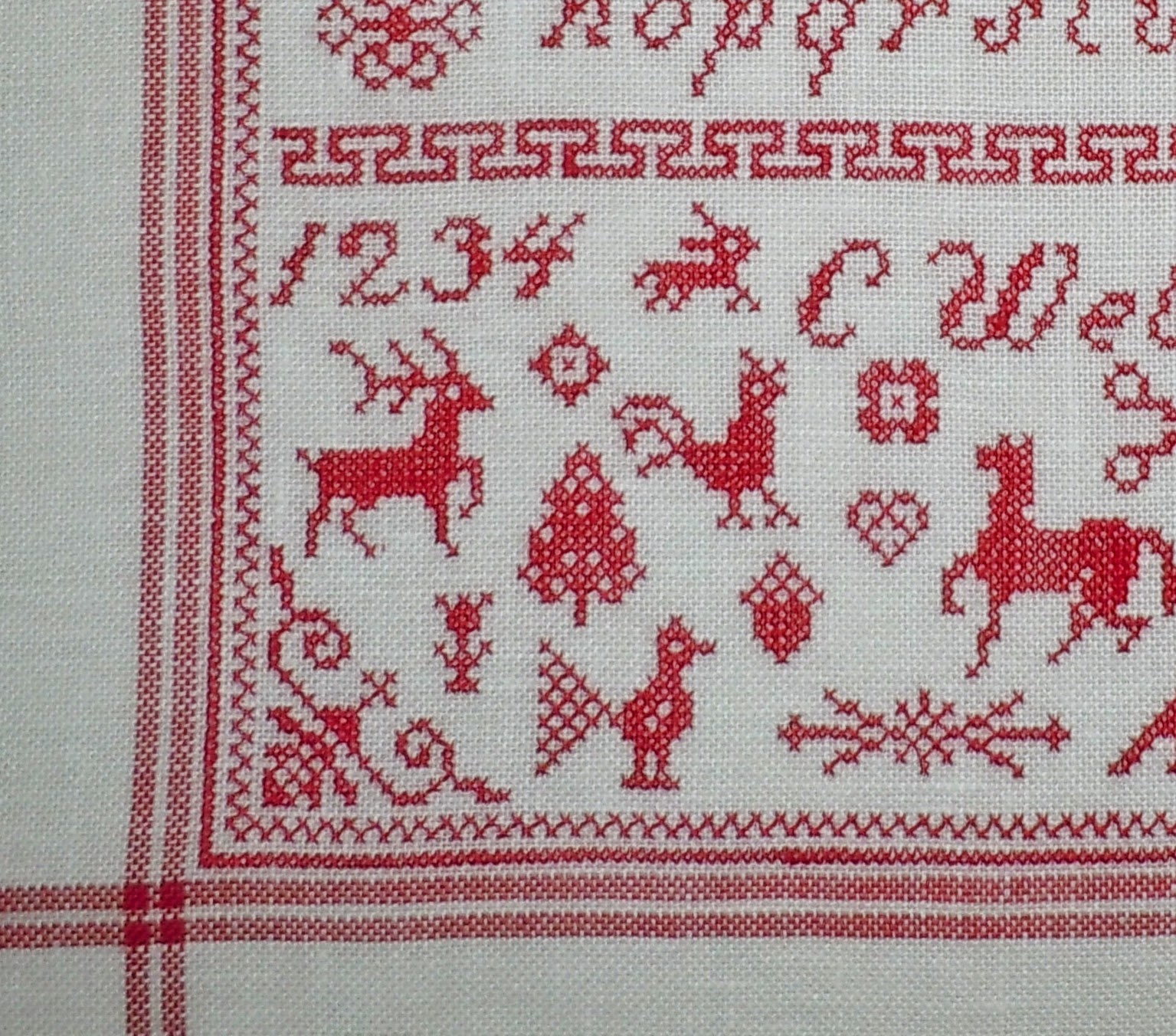 Katherin's wardrobe has been growing slowly. I had finished the embroidery and made up the two pieces, the petticoat and the stomacher. Now I only needed to finish the dress. At this point I sort of came to a standstill because I had to think things through before I could go any further. Just how was I going to fasten the stomacher to the dress? If this were a real dress and all its parts, then they would be pinned together as the lady was getting dressed. Not having pins quite small enough to do the job, I had come to halt. As much as possible as I have been working on the clothes, I have used fabrics, patterns, techniques and designs that were period appropriate. Sewing all of the clothing by hand with silk and linen really added to the overall look that I wanted. At this point however, I decided to sew the stomacher to the sides of the dress and then sew the skirt onto the bodice.  Having made that decision, it was time to make a mock-up for fitting and to create a pattern. I started with the same dress pattern that I had used for the corset and altered as necessary to fit over all of the layers of clothes that she was already wearing. The bodice is lined with a very thin china silk and sewn with size 100 silk sewing thread. I gauged the sleeves so that the gathering looks like it should and sewed 26 very tiny eyelets down the back for  lacing the dress up along the back. It still needs the lace sewn along the edge of the sleeve and around the neck but the construction is finished. I was able to purchase some fragments of hand made lace to use on Katherin's dress. The scale of the lace makes it look like the heavy lace that was used at the time. The skirt is next, then the lace, ribbons and the finishing details. 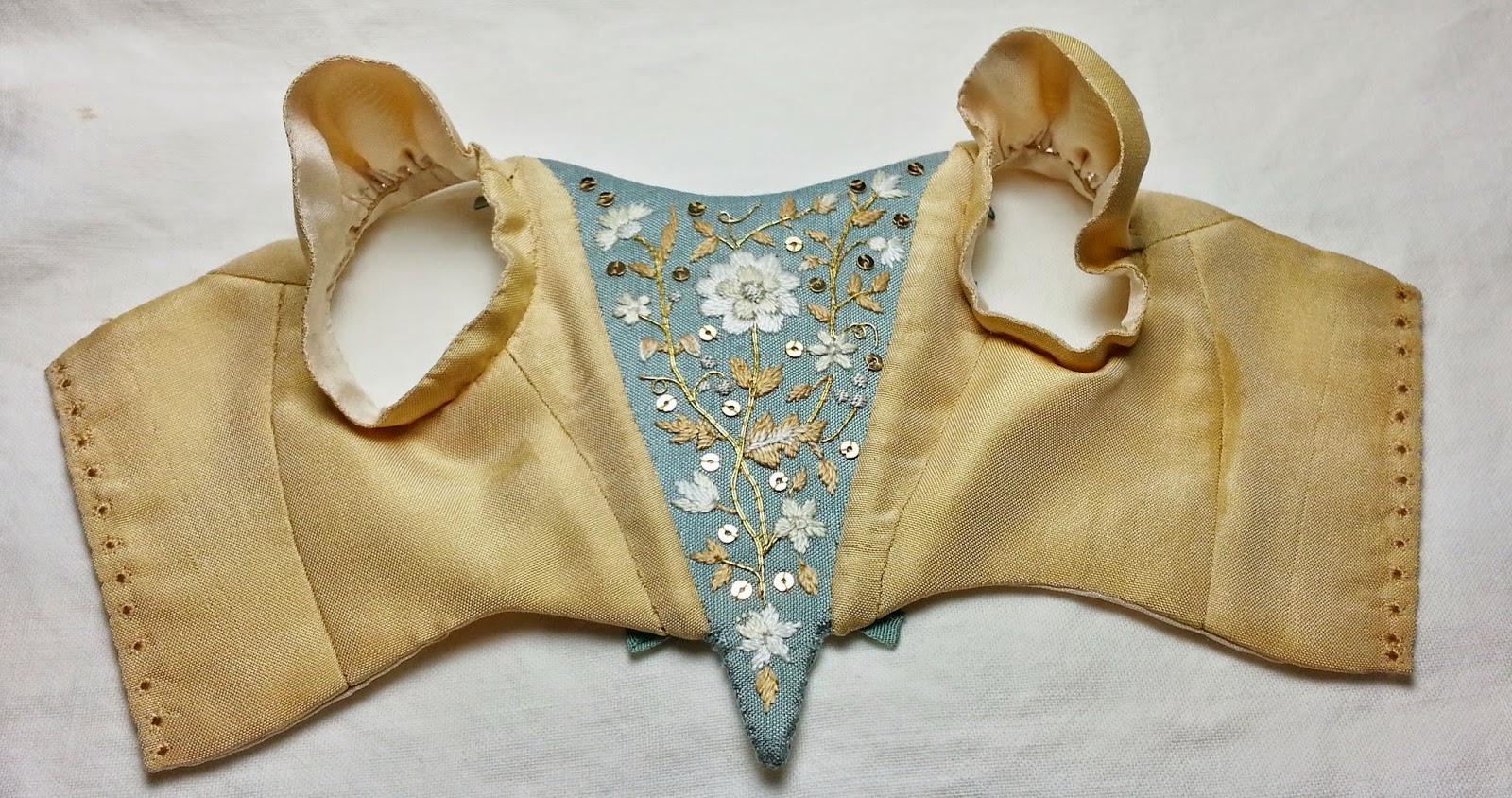 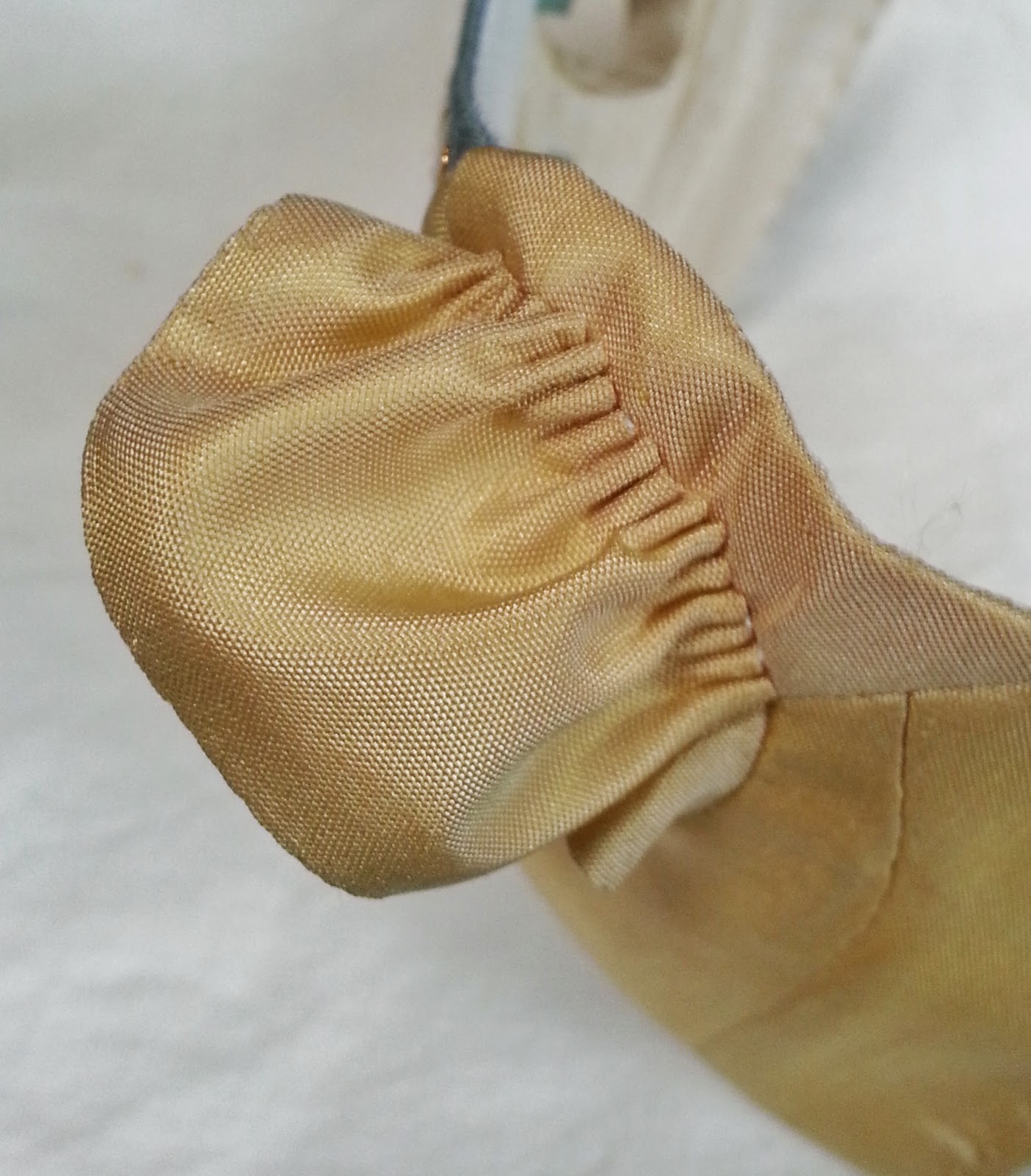