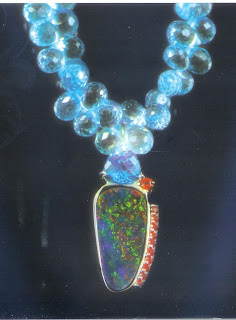 An interesting thing happened to me last week and it still has not quite sunk in. Several weeks ago we visited Park City Jewelers and entered a contest. If you guessed the closest to the total carat weight of the necklace then it was yours or you could choose store credit instead.
I went in and studied the necklace and made an educated guess. My father has for years been a silversmith and I have learned bunches about gems and their sizes.
The necklace was blue topaz briolettes with a pendant of blue topaz, black opal with orange sapphires set in white gold.
I put in my guess for 238.58 carats and the true weight was 237.98 carats.
I was at work and got the call that I had won. I wanted to dance and celebrate but work didn’t seem to be quite the place to do that so settled for calling lots of people to share.
I went up to the store 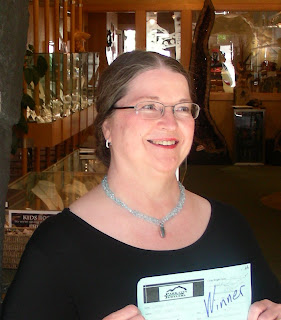 later that week and tried on the necklace and wore it for about 45 minutes while I decided what I wanted to do. It was stunning but I realized that for the few times that I would have a chance to wear it it would be better off going to someone who could show it off. So in the end I decided to take the store credit instead so it will be an adventure to see what fun things I end up with.
Posted by Carolina House Designs at 4:39 PM 1 comment: