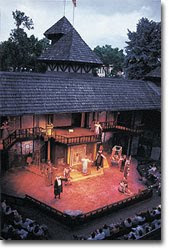 Summer has slipped away and Fall with cold crisp nights is here. Summer has been a busy season for me. I was able to attend the Utah Shakespearean Festival in Cedar City, Utah. The Tony award winning festival was a lot of fun. We saw two of the comedies, As you like it and Comedy of Errors. Nothing in them to challenge the mind but just laugh and enjoy the words. The plays are performed in an open air replica of the original Globe Theater. We were able to tour the backstage area of the theater and visit the costume shop. Which was fascinating since I have done costuming in the past and for a while thought that I would get a degree in theater costuming and work in the local theater scene.

ere I was able to join a group of fellow stitchers for an Amy Mitten class. For those of you who don’t know Amy, she designs embroidery that is part of a mystery story. As you read her story, parts of the sampler is revealed. Her hand dyed threads are a dream to stitch with and they have names like murder and dirty rat. Our story was actually a play with a wonderful Elizabethan embroidered band . My favorite part of it was the tent with the embroidered lady. 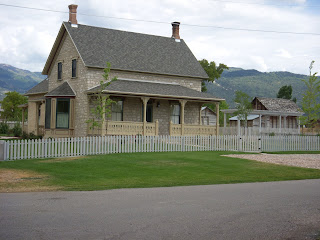 The next week I went on a quilt retreat in the mountains of Utah. While there we went to visit a few of the surrounding towns - Mt Pleasant and Spring City. As I looked a the houses I thought of some great ideas for embroidery. The houses were the most wonderful color of limestone.
Spring City is developing as an artists community. We visited a fabulous potter. His name is Joseph Bennion and runs Horseshoe Mountain Pottery. He uses a wood fired kiln to fire his pots. His wife Lee Udall is a painter who does some interesting portraits. They are a bit modern for what I usually like but on hers the spirit of the person comes through and I like them. I bought a pot there - he made the pot and she painted it. It is shaped like a Bundt pan and we have actually used it to make monkey bread. 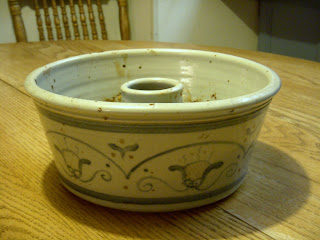 Here is the recipe for those of you who have never had it. It gets it name because to eat it, you just pull it apart with your fingers or a fork.
Monkey Bread
2 tsp
Butter (or Margarine)
a Cup
Brown Sugar
1 Tbsp
Water
1 tsp
Lemon Juice
¼ tsp
Cinnamon
1 pkg
Refrigerator Biscuits (10 oz)
While preheating the oven, place butter in an 8-inch cake pan and put in the oven.
Mix brown sugar, lemon juice and water and cinnamon in cake pan with butter.
Cut biscuits into fourths and place over sugar mixture.
Bake at 400 Degrees for 15 to 20 minutes.
Posted by Carolina House Designs at 7:39 AM No comments: