I don't know about you but most of us have a favorite designer or two. Their work has such a great look that everyone likes the pieces.
One of my favorite designers is Cynthia Jackson. She lives in Canada so I don't see her very often but have enjoyed taking several classes from her and we have taught at some of the same seminars.
The  pieces are American Ivy and Corinthian Column.
Last year  I was lucky enough to notice that she was going to teach at the national EGA seminar in the fall of 2018 and asked if I could be in the pilot class for one of the classes. She said yes, so I have spent a number of hours working on one of the pieces.  It is called Rose and Pomegranate and was adapted from a design created for Henry VIII and his first wife Katherine of Aragon. It is the Tudor Rose of  England and the Pomegranate from Spain. 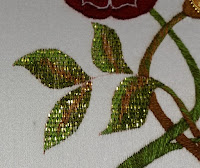 The design is wonderful and I enjoyed working with the silk, gold and silver threads and metals.There was a technique that she used that was new to me and gives a fabulous look to the leaves where it was used.  Colored threads are couched over metal plate so that just some of the gold peeks through  the silk. 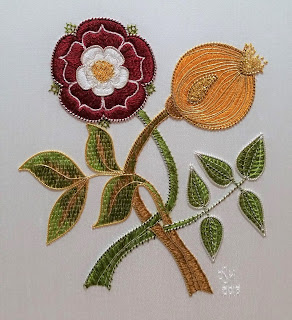 I have featured Corinthian Column before on the blog,
This piece is called American Ivy and the technique is English Goldwork.
Some of the leaves are painted green leather and others are colored bullion. 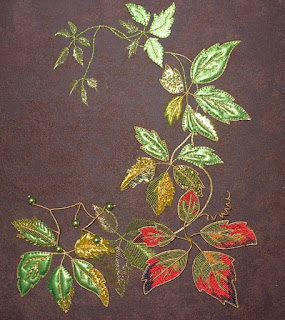 I have finally started putting pencil to paper for my casket project. So as I start stitching, I will post some of the work. I am starting with the smallest bands on the lid and will work my way down to the larger areas. I am so excited to get started.


Posted by Carolina House Designs at 9:41 PM No comments: