It's done.... I switched my web information to carolynstandingwebb.net or carolinahousedesigns.net. I had been using the old names for more than 10 years.
Building the site took longer than I wanted but not as long as I thought it might, but it is now working. The new hosting company was very nice and got things going in just a few minutes. The company who took over my old names wanted more than $536 to give them back to me. The old web name is on so many patterns but onward and forward.
It took me most of the day to set up the new site but now I can at least work on it and make changes as I need to. The language of the last site was so hard to use that I needed help to even add a class to it.
I won't be updating it very often but will add things from time to time.

Now on to fun things. One of my darling students, Linda Smith,  not only sent a photo of her finished piece but also sent me some pearl shells. In class we were talking about pearls and pearl buttons and discussed how American shells were used for both of them. The button blanks were cut from the shells and then polished and drilled. Japanese cultured pearls start with beads cut from the shells. I had known about them but had never seen the shells and now I have three of them to add to my collection of antique sewing tools. 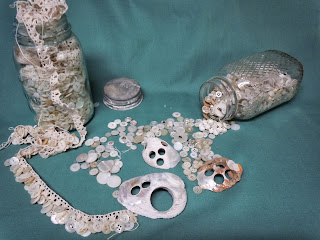 Here are the shells with some of the buttons that would have been made from them. 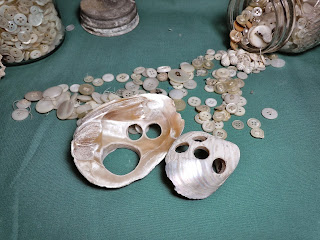 See how the inside of the shell glows. 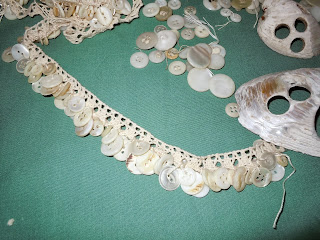 Here is some lace that I crocheted using the pearl buttons. It really makes an interesting edging. 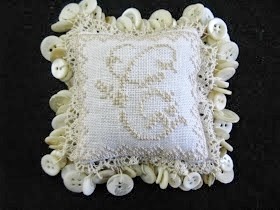 I used the edging on this pin cushion and added a fun initial from an antique French alphabet in the center.
Posted by Carolina House Designs at 9:16 PM No comments:

My web site has decided to take a holiday. Not that I wanted it to but it is gone until I can figure out what went wrong. I paid my fees for the carolynstanding.com and carolinahousedesigns.com addresses but now I am informed that they are up for sale. NOT NICE !!!!   Why does it always do this on a week that I am out of town and/or on the weekend. Or in this case it just combined both of them. I am not quite sure why non-functioning machines (and that also includes computers and related programs) remind me of cranky two year olds but they do. Every time they decide to act up it is like working with a tired and very uncooperative little person. There is not much you can do about it but find a way to work around it. Oh well, until I get this fixed, know that I am still here and will be back on the web as soon as I can.

On to better topics. I have just returned from teaching at a seminar in Louisville Kentucky. It was the national seminar for the Embroiderers' Guild of America. Partly by accident and partly on purpose I am slowing down the traveling and teaching for a while. The students have been wonderful and I have loved meeting all of them but after about 20 years of being on the road, it is time for a bit of a break. I am not quitting, the teacher for hire sign is still out.  I still have several classes scheduled but right now I need to recharge the batteries and stop the feeling that I am running in an endless circle. 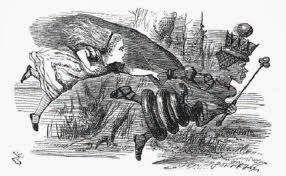 It is time to do a few of the things that I want to do with out a deadline attached.
I have been working on Faith, Hope and Charity again. This is certainly a project with out a deadline. During the house construction I have worked on it a lot. Somehow it seems soothing to stitch tiny even crosses when I was living in chaos. Here is a photo of how it is growing. 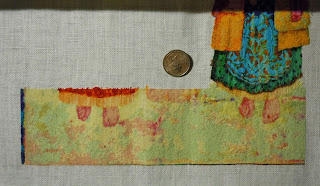 The house I nearing completion... here is a corner of the expanded family room. There are still boxes to unpack and plies of "stuff" to decide where it should go but the walls are painted and the carpet is in place. 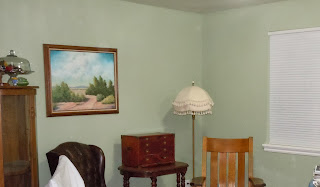 I have been collecting sewing tools for years and one of the things that I have always wanted was a special pair of scissors. Now those of you who have seen my collection, are in chorus saying "another pair of scissors". These are Mother of Pearl handled scissors from the Palais Royal in France. They were made in the mid 1800 and are usually part of a special sewing box. I have not been willing to part with enough money to get the whole box but have several pieces of a 'set'. Well, I found a pair of scissors for sale and now they are mine. One day the plan is to have a box made and create my own set of these wonderful tools. 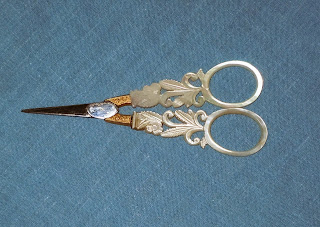 Posted by Carolina House Designs at 5:13 AM No comments: