From an idea to an embroidery

It is an interesting feeling to create some thing and see it through to the finished project. Ideas come from so many random places that although there is usually one thing that starts the creative process, you never know what the end is going to be. Often I get an idea and it stays in my head for a while doing what I call kind of wandering around. Then one day it gets the chance to pop out and gets put down in concrete form in a design. I never know how the idea is going to change between the fist thought and the final form. They rarely look 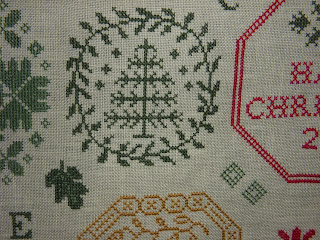 anything like the original thing that I saw that started the whole process.

Sometime the oddest things are the genesis of a design. One pattern was created to fit a frame that I found and another started because I bought some yellow glass-headed pins.

I have been stitching on a new piece and it is finished. The few that I have shown it to seem to really like it so hopefully others will also. Here is a part of it, Ican't put the whole embroidery on since it isn't ready for sale yet.

Posted by Carolina House Designs at 9:23 AM No comments: