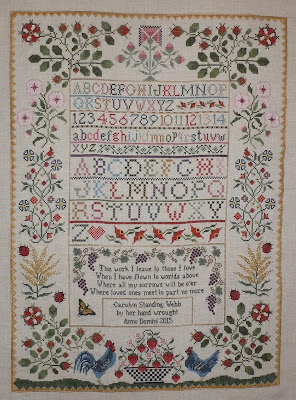 This sampler is A Delaware Inspiration by Theresa Baird of Heart's Ease Exampler Workes.
I started stitching it last January as part of a stitch along for the Swan Sampler Guild. It is stitched on 40 count Pearled Barley by Lakeside Linen with a variety of silk threads. Some of them like Gloriana and Belle Soie were overdyed and others were just a single color.
Theresa sent us a post with the section that we were to work on for the next month. Some months it was relatively easy to get the stitching finished but others not so much. Sometimes life does get in the way of embroidery. I did leave out a couple of motifs, a fox and the holly leaves but did stitch the blue chickens that I was not sure that I liked when I started. The longer I stitched, the more the blue birds seemed to fit.
I just sent off a new pattern to Kelmscott for release later so this has been a productive period although I have spent more time at my parent's doctors that I wanted.
Now to decide what I want to start next........
Posted by Carolina House Designs at 4:58 PM