After being inspired by Jenny Adin-Christie's harp, I finished my version of the original harp and posted it to a page to share it with fellow embroiderers.  I received some feedback about violating her copyright since I had looked at her kit. I don't agree but rather than anyone think that I would do that and since I was not happy with the proportions of mine anyway. I took it apart so that version of the harp no longer exists.
I was aiming for a Celtic version of a harp so back to the drawing board with the research photos. I decided to go for a truly Celtic shape with the strings ( needles) on the slant.
A few more mock-ups and the Celtic harp took shape. I really liked the proportions of the new harp. I kept the sound box with the embroidery since that was exactly the shape of the one that I liked the best. The new shape was great but a bit plain. 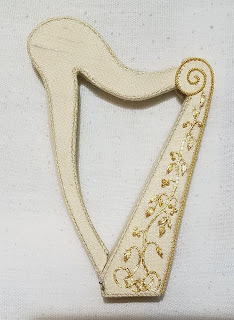 A friend of mine said that one of her teachers told her that you need to stitch something three times to get it right.   So...number one try was my reproduction harp. Enter the dragon, not Welch since she is not red but a very Celtic dragon anyway. She perches along the neck and winds her tail around the column. Number two try, I stitched part of the dragon, cut it out to apply it to the harp and it fell apart. Well the third try finally worked out like I wanted it to. The dragon is perfect and so is the harp. 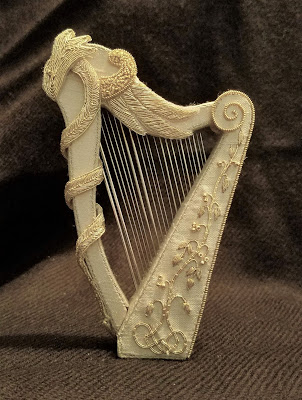 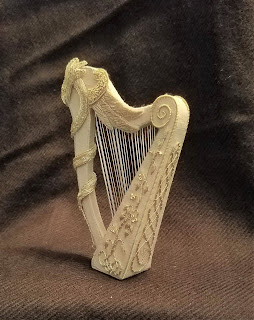