When Tricia from Thistle Threads announced a contest to create a toy for our Cabinet of Curiosities, I just had to play. She encouraged us to use some of our threads from the Frosting Club box in the toy. I love tape measures (among the other sewing things that I enjoy) and I loved one of the examples that she posted so I decided to see if I could recreate it as much as possible..I named it the partridge in a pear tree.  I tried to use historical techniques as far as I could puzzle them out.  One of the fun parts is the fact that many parts of it move as it turns to unroll and re-roll the tape measure. I marked the tape in nails which is  an older form of measuring length.  I added all sorts of hanging treasures that I thought a young girl might want to do.
I have downloaded a video of the tape being pulled out and rolled back in so you can see the fun way that it moves.
It's hard to see the detail in the video so I have also posted a few pictures that show things better. 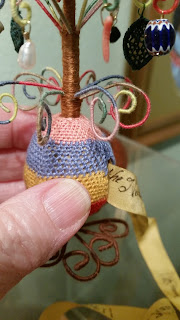 I love the silk covered walnut that holds the tape. The writing on the tape is a quote from John Taylor the Water Poet written in 1631. It is called The Praise of the Needle and I only used this part of it
Flowers, Plants, and Fishes, Beasts, Birds, Flyes, & Bees,
Hils, Dales, Plaines, Pastures, Skies, Seas, Rivers, Trees:
There’s nothing neere at hand, or farthest sought,
But with the Needle, may be shap’d and wrought . 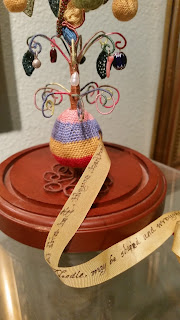 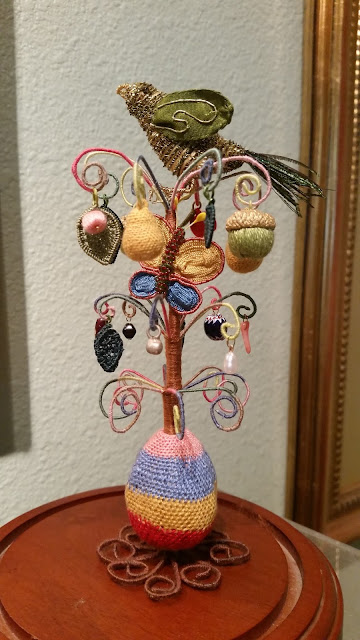