Since I last wrote, I have been doing some stitching along with all of the other things that make up life. Our EGA chapter is doing a UFO challenge this year. We were to take an unfinished piece that was at least two years old - mine was more like 15 years -  and work at least 15 minutes a day on it until it is finished.
I had a couple of designs from Betty Chen Louis that I have wanted to finish ever since I took the classes many years ago. So I decided that I would work on both of them, although not at the same time. My problem with starting was that all I wanted to do was stitch on the piece and finish it.
The first one was Butterfly and Grasses. Betty had a way of blending threads that were related but not close in color. She called it optical blending and it is unique and gives a great effect. I really like the way that it turned out. I am glad that I did not finish it years ago since I have learned so much in the years since and I think that it turned out better than it would have. 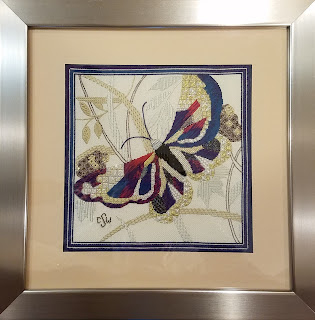 The second finish is a new design that came into the shop and I just had to stitch it.  Not too hard but lots of fun. I like the mix of design with the bee shape and the quilt blocks as part of it. It is called Queen Bee. 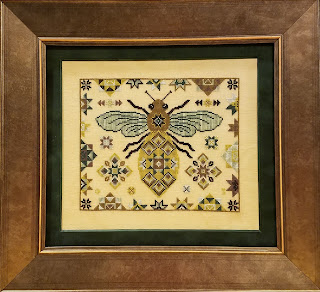 Here is the latest snap of my progress on Faith, Hope and Charity. Charity now has her hands and the very multi colored vest is almost done. Going a bit slow but still making progress. 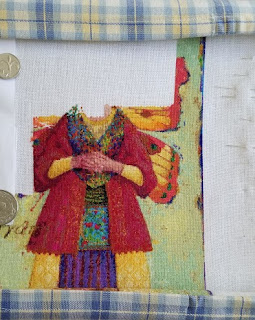 I bought this dress which was made in about 1910 and is sometime called a lingerie dress. I found it in about 1970 in an antique shop and at the time I was able to wear it in fashion shows. I love the style and way that they have used lace on the dress. The afternoon dresses were made of fine cotton with tucks and inset lace.
I had an antique dress form so I padded the form and covered it in fabric so that it fit the dress. I used some vintage fabric and lace to make the chemise and petticoat so the dress would look like it should.
Finally I put the dress in it and added a ribbon sash. It sets in my workroom so I can enjoy looking at it.